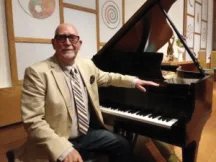 David Blazer was born and raised in Oklahoma where he began studies with Douglas Payton on piano and Oneta Puckette on the organ. At age 15, he became the organist of the First Presbyterian Church in Miami, Oklahoma. He studied at the famed Oberlin Conservatory of Music in Oberlin, Ohio, where he received the B.M. in Organ Performance under the guidance of Garth Peacock and George Lamb. He continued his studies in Early Music Performance Practices at Case Western Reserve University and in Liturgical Music at the University of Notre Dame. For many years he has participated in studies of Gregorian Chant at the Pontificial Institute of Sacred Music in Rome, Italy. From 1987-1997, he was the Executive Director of the Riverside Academy of Music. He is a member of the American Guild of Organists where he holds the Service Playing Certificate. He is a member of the Unitarian Universalist Musicians Network and the Organ Historical Society.

David Blazer is currently the Director of Music and Organist of West Shore Unitarian Universalist Church in Rocky River, Ohio. He is also the assistant director of choral activities at Lorain County Community College where he is accompanist for the Lorain County Civic Chorale and also teaches private voice and piano. David Blazer is widely known for his jazz piano in local clubs throughout the Cleveland area including the famed Velvet Tango Room.